For your dinners by the sea, MOLO “G”, the restaurant, located on the quays of the marina of Esaom Cesa, is special, reminiscent of a bazaar in a port city, tables with marble tops as used in the taverns of the Livorno province, tables and chairs of every wood, they manage to make an imaginative and fun place with nothing.

Never banal, like the menu we invite you to discover.

Esaom’s guest sailors find a valid point of reference for all their needs in the Millenium dealing point operating within the Shipyard: a complete service center, managed by the well-known Millenium brand, which also offers the washing and winter storage of sails .

Keep Sailing is the new Montura clothing line for boating and sailing.

At the Esaom showroom in Portoferraio, you will find a wide selection of items from the summer 2020 collection.
Innovative solutions and technologies applied for the first time in the world of sailing, developed with the greatest champions of this sport.
We are waiting for you. 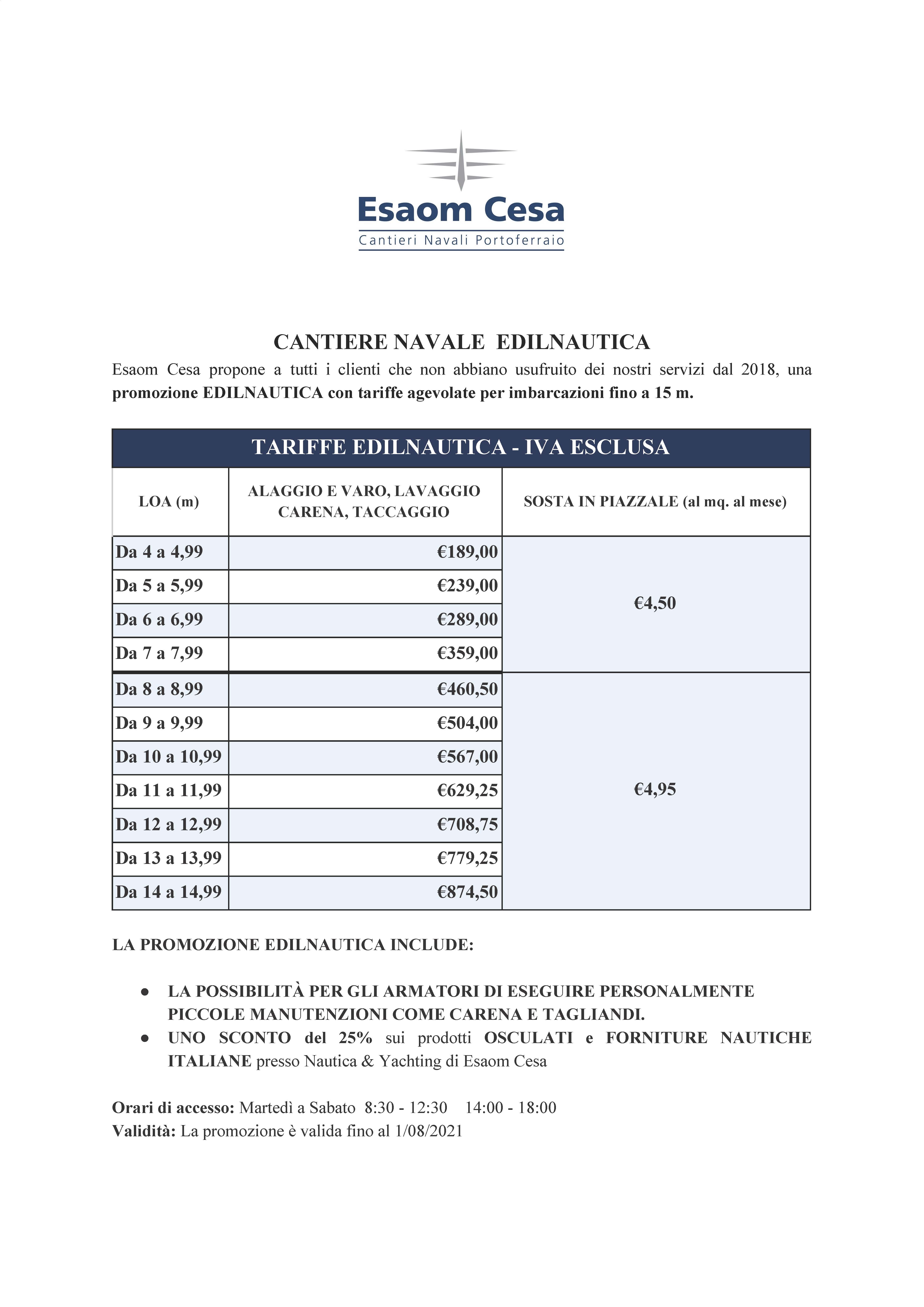 Within our second dock “Edilnautica”, we have prepared a series of services and spaces available to the nautical charter companies that wish to have an operational base on the island, with all the innumerable advantages that derive from it.

leggi tutto
marinaElbaCHARTER BASE AT THE ELBA ISLAND08.06.2019

After the 4,500 square meters of roofs of Eternit of the Edilnautica warehouse, Esaom Cesa is preparing to clean up another 3,500 square meters of roofing by 2019 replacing the current roof of the main hangar.
This is one of the many interventions that the Company is carrying out to improve its production facilities. The removal of the coverage is voluntary as the annual monitoring analyzes have never detected risk factors for employees or the environment.
Esaom Cesa will also ask the competent authorities for the possibility of placing state-of-the-art photovoltaic panels on the new roof
thus completing a further stage envisaged by the Company’s development programs which – as is known – has already deposited the project for the expansion of the towing and launching tank in order to be able to move boats up to 65 meters.
Finally, the Porto Cantieri project is expected to be deposited towards the end
current year.

From April 12th, the company BLU NAVY with M / N Acciarello, 800 passengers and 230 cars in tow, will cover the Piombino-Portoferraio section at a speed of 16 knots, adding further time opportunities to reach the island.

Esaom Cesa offers extremely advantageous conditions for boats from 8 to 15 meters. of private citizens, residents of the Island of Elba, who wish to personally take care of the maintenance of the
own boat and craftsmen of the nautical chain (subcontractors), who wish to carry out their activity in an equipped yard, at minimum costs. Consult rates and conditions at the link:

The offer operates exclusively at the Edilnautica Shipyard area, in the immediate vicinity of Esaom Cesa.

Twelve events scheduled for the 22nd edition of the event will take place in Portoferraio (Teatro dei Vigilanti “Renato Cioni” and Piazza Cavour), at the Hermitage Hotel, at the Villa Romana delle Grotte, in the Church of Santa Caterina di Marciana Marina, in the Fortezza Pisana di Marciana Alta and finally to the Volterraio Castle.
Great artists such as I Solisti di Mosca led by Yuri Bashmet, Tony Momrelle with his quintet, Camerata Fontainebleau led by Gordan Nikolić, Mario Brunello, as well as a group of well-known concert performers from many European countries, the United States and Japan, spoke .

The Strega Prize to the island of Elba, Saturday 4 August 2018 from 9:45 pm to Marciana Marina, probably the ‘highlight’ of the cultural summer of Elba:
guest the winner, the writer Helena Janeczek. The master Italo Bolano, the most famous Elban artist, has created his special work for the occasion, dedicated to the figure of Gerda Taro, the photojournalist of the thirties of the twentieth century, protagonist of the novel of the winner.
So the return of the Witch to Elba is an important opportunity to get back to the center of the Italian cultural scene.

leggi tutto
marinaElbaTribute to the winner of the Premio Strega08.03.2018